This is more of a funny story and not really that serious. I just found it funny looking back. In 2017-2018 I went on a pretty long hackathon tour travelling around the US and Canada. 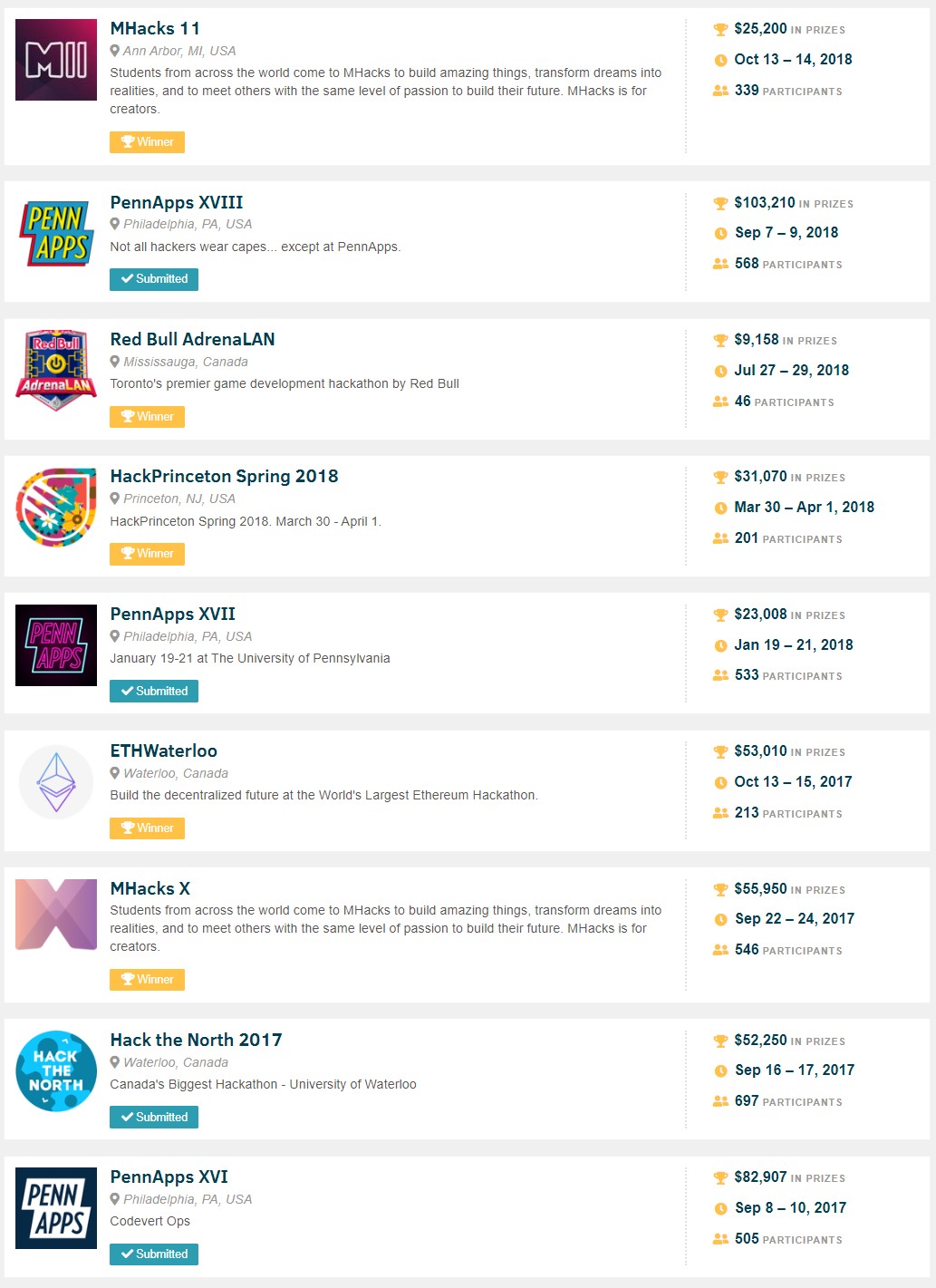 (Photo shows the hackathons with most recent at the top)

I’m ignoring Hack the North cause I my team disbanded and I’ve only gotten accepted once. Also it works better for the narrative of this post if we ignore Hack the North 2017.

PennApps is the OG hackathon. It actually is the FIRST hackathon. (Source) They set the standard in a lot of places, notable MHacks, for fun, events, swag, and overall organization for a lot of hackathons.

Many hackathons claim to be the “largest one in NA”, but PennApps (at least before 2019) was the one of the largest hackathons usually totaling 1000+ and probably closer to 1200+. Even hackathons like Hack the North were usually capped at ~1000 due to space requirements before E7 expansion.

I think I actually went to a few hackathons that claimed to be “the largest” hackathons in North America which included MHacks 8 (2k+ people) and one of the iterations of PennApps. I don’t have exact figures or remember exactly. The Mhacks 8 masonic temple 2k+ is probably another story in itself cause Detroit streets are kinda bare midday.

PennApps takes its name from University of Pennsylvania. The school is most known for their business program “Wharton” with famous people attending that school like Donald Trump, Elon Musk, and Warren Buffett. (It is true, look it up)

It is also a bit of a brutal bus ride to Philadelphia. It is ~8 hours one way from Waterloo including crossing the border. Not only is that a huge time sink (you usually leave early Friday and coming back on Monday at 3am was not uncommon) but there is fatigue as opposed to being “local to the area”.

I don’t want to make that seem like an excuse but it is easier when you live in the area and hack as opposed to sleeping on the floor (which I had to grow accustomed to) for many hackathons. Sleeping on the floor is an acquired taste, and if not then you usually collapse from sleep deprivation or exhaustion.

Why did I never win at PennApps?

Honestly hackathons are variable enough so I’m not too upset I never won at a PennApps. One of the factors that contributed might be the level of competition and what projects the judges usually look for. PennApps is a very hardware focused hackathon and I found a lot of physical projects won due to their tangible nature. I’m going to look back at each time I went to PennApps.

I’m not very familiar with breadboard, arduino, or raspberry pi projects. Looking back at hackathons I think I only did pure-software projects.

This was my first time going to PennApps. I formed a team at team formation and we were working on a project involving the blackrock api charting stock prices. This one I had a really good feeling about since a lot of judges were really interested in the project. I was fairly sleep deprived due to working on bugs in the backend api calls and trying to figure out what a promise was. I felt we were really close with this one.

I tried using NLP to parse crypto whitepages and explain them in an easy format. This project I tried to carry the team and the idea itself was a bit flawed both from UI and overall execution. Sometimes ideas flop and that’s ok.

We were working on a Unity game that focused on disaster prevention. I thought the idea was pretty solid and the execution wasn’t too bad either. We had a team that was fair committed and hardworking on the project. It didn’t pan out in the end with judges.

Final Thoughts on The PennApps Curse

Did I get cursed by PennApps? Who knows. If I went back for a fourth time I don’t think I would be able to win. I’m much more skilled than I was 3 years ago but proven by NwHacks I can’t go as long without sleep as I used to. I think it is funny to think I never was able to get the MLH hackathon three-peat due to PennApps separate times.